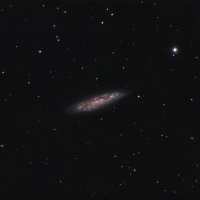 Not much needs to be said about M 108, a great spiral galaxy in Ursa Major, apparently situated right next to the famous Owl Nebula (M 97), a Planetary of our own Milky Way. Both contrast nicely given that they are separated by some millions of lightyears. M 108 itself reveals several dustlanes indicating that we are looking at this galaxy from the edge (although it is not a perfect edge-on like NGC 891 for instance). This is the official first light image for the new Celestron 11 Edge HD telescope taken under very good seeing conditions. Make sure to look at the full resolution image.